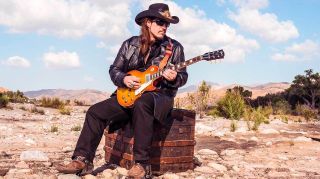 Lance Lopez, a key member of blues supergroup Supersonic Blues Machine, has released a stream of The Real Deal, taken from his upcoming seventh studio album Tell The Truth. The album is released on March 2, and is the follow-up to last year’s Live In NYC collection.

“The Real Deal is what the Tell The Truth story is all about,” says Lopez. “It’s about being who you are and being as true as you possibly can. It’s my story from my perspective told with unapologetic honesty. It’s like shaking hands with someone and looking them in the eye while you do it.”

Lopez started playing professionally in New Orleans bars at the age of 14. He performed with the likes of Johnny Taylor and Lucky Peterson as a teenager, and eventually joined the Buddy Miles Express. Along the way he’s built something of a reputation amongst his fellow musicians.

“Texas has been known throughout the years to be the breeding ground for some of the baddest guitar players of all time. Lance is yet another one to carry on that Texas tradition,” says ZZ Top’s Billy Gibbons, while Jeff Beck describes him as “very exciting and intense.”

Tell The Truth was produced and recorded over the last three years by Fabrizio Grossi in Los Angeles, and is influenced by the British blues rock invasion of the 1960s, Jimi Hendrix and Lynyrd Skynyrd.

The album is released on March 2, and is available to pre-order now.

Lopez will be special guest on this year’s Rockin’ The Blues tour, which also features Eric Gales, Gary Hoey and Quinn Sullivan, and climaxes in London on March 17. Full dates below.