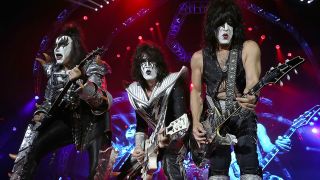 Paul Stanley has ruled out the possibility of Kiss recording another studio album before they bring the curtain down on their career.

Kiss announced they would head out on the End Of The Road farewell tour last month, saying they would “go out the same way we came in... unapologetic and unstoppable.”

Bassist Gene Simmons said back in March 2017 that he had no inclination to record the follow-up to 2012’s Monster as people would illegally download it if they did.

Speaking at the Rock And Roll Fantasy Camp, Stanley was asked by radio host Miles Schuman if fans could expect any new material before calling it quits.

Stanley replies: “No. I don't think so. It's a different time now. I could write Let It Be and people would still say, 'That's great. Now play Detroit Rock City.'

"I understand it because when songs have a history with you, they're like a snapshot of a time in your life – and that's not something that anything can take the place of overnight.

“It's interesting that I think Modern Day Delilah or Hell Or Hallelujah are as good as anything we did, but I understand that people are more connected to those old classic songs.”

Stanley adds: “If you put on a live video concert of any band – if you put on Paul McCartney or the Rolling Stones – and you turn off the volume, I will tell you every time they're playing a new song, because the audience sits down.

"At some point I go, ‘What's the point?' Unless it's something that's fulfilling for me to go back in the studio just to record new Kiss material, I think everything we've done so far speaks volumes and it's enough of a legacy.”

Further tour details will be announced in due course.