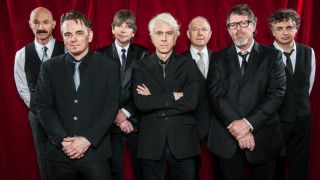 King Crimson mainman Robert Fripp is hoping to bring the latest lineup of the band to the UK in September 2015 – providing issues over venues can be resolved.

The seven-man lineup recently completed their first run of shows in the US, after he put industry wrangles behind him last year and reactivated his touring career.

Fripp tells the Telegraph: “I’ve discussed the possibility of working in Europe next year, including the UK in September. There are still problems to do with the quality of venues – but it’s being looked into.”

He recently revealed that the current lineup, featuring Mel Collins, Tony Levin, Pat Mastelotto, Gavin Harrison, Jakko Jakszyk and Bill Rieflin, is the first with which he’s genuinely enjoyed touring. Now he says: “It’s the first Crimson where I don’t sense any animosity or resentment from at least one member. This is a group from the get-go; the money is divided equally.”

The 68-year-old accepts the accusation from former colleagues that he was a hard taskmaster in previous incarnations of the band. “I’m a very difficult person to work with – because in King Crimson there was a founding statement to be honoured, going back to 1969,” he says.

“And if what is available fails to meet what I see as a responsibility to the larger Crimson, then that gap has to be met by someone. And it would fall to me. So it’s not a comfortable place.”

But his current activities come after a period in which he discovered a great deal of personal happiness, which he says made it easier to face returning to the road. “My wife told me I was in danger of becoming dull,” Fripp explains. “What I’m doing now was partly a necessity. When you’re happy, it’s time to pull out the pointed stick.”