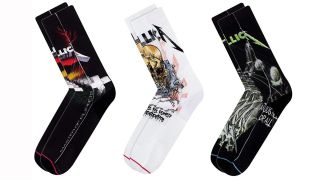 It’s the end of October and there no mistaking the chill that's been in the air recently. Summer is sadly a distant memory – but don’t despair, as Metallica have you covered… well, your feet at least.

Yes, the band have only gone and released a range of branded socks, so you can represent Metallica at home, while out on the town, at a gig, or at that long office meeting with your boss.

There are seven pairs to choose from, including Pushead designs, a Master Of Puppets look, a pair of …And Justice For All branded socks and a rather neat pair simply featuring the band’s famous logo.

All seven are now available to purchase and could be just the thing as those long dark nights get even colder. Check them out below.

Metallica sock range
Thrash giants Metallica have released a range of seven sock designs to keep tour toes warms this winter. From a pair featuring the band's iconic logo, to a fetching pair representing their classic Master Of Puppets album, there's something to fit everyone.View Deal