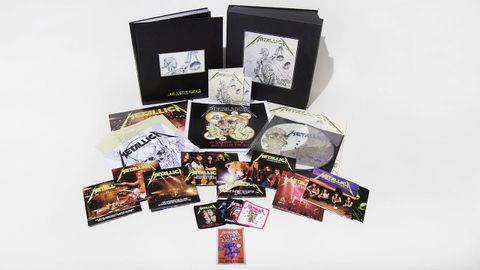 It’s fitting that Metallica’s weightiest album gets the bulkiest treatment so far in their ongoing everything-plus-the-kitchen-sink reissue campaign. The band’s fourth album was the point where the prog-metal streak that had been bubbling beneath the surface on Master Of Puppets rose to the surface. In its original incarnation, …And Justice For All swung between the brutal and the complex, the slick and the indigestible. It was the most fascinating of their run of classic 1980s albums, but also the most flawed.

The top-of-the-range deluxe edition deconstructs this behemoth across – deep breath – six LPs, 11 CDs, four DVDs and one picture disc. The collection of riffs, fragments, demos and works-in-progress spread over three of the CDs work as a jigsaw that Metallica fans can gradually piece together – even if most of these songs were well on the way to being fully formed.

Elsewhere, five discs’ worth of era-specific live tracks offer little that Metallica completists won’t already own, though they highlight the problem Metallica had with recreating some of the songs onstage – it would be years before they played The Frayed Ends Of Sanity (too complicated), Dyers Eve (too fast) and To Live Is To Die (too much baggage). What the live material does illustrate, though, is just what these songs sound like with bass in them.

And that’s the biggest fault with this reissue. While the newly remastered version adds sparkle and uncovers long-lost sounds – who knew a ghostly wind haunted the intro of Harvester Of Sorrow? – the infamous, Jason Newsted-free mix remains intact. James Hetfield has claimed that the band wanted to preserve the original album’s integrity, and you can see his point. But swapping out one live disc for a brand new, bass-boosted take on the album wouldn’t have hurt anybody. As it is, …And Justice For All remains what it always was: bold, brilliant, but imperfect.

For Fans Of: Testament, Lamb Of God, Mastodon

Today's best metallica: ...and justice for all (deluxe edition) deals
8 Amazon customer reviews
☆☆☆☆☆
…And Justice for All...
Amazon
Prime
£155
View
And Justice For All [VINYL]
Amazon
Prime
£185.98
View
We check over 130 million products every day for the best prices
Metal Hammer Newsletter