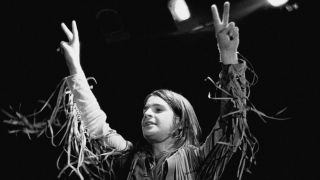 The story of Black Sabbath is one of chaos, inspiration, luck and moments of outright genius – and never more so than during their stellar rise in the early 1970s. Between 1970 and 1975, the band released six groundbreaking albums – a run that still stands as one of rock’s greatest hot streaks.

If 1970’s Paranoid album raised Sabbath’s profile on both sides of Atlantic, it was the follow-up, 1971’s Master Of Reality, where everything truly came together. Producing the album themselves gave the band the opportunity to experiment – most notably, Iommi’s decision to tune his guitar down by three semi-tones, to reduce string tension and make the instrument easier to play with his damaged fingers, inadvertently made Sabbath’s sound even heavier, denser and doomier.

Tony Iommi: The whole thing was an experiment.We tuned down to get more power and a fatter sound. Of course, Ozzy started singing higher. He’d go, “Oh, I can reach that note now.” However, when we got onstage, he couldn’t do it.

Bill Ward: I was pulling off a lot of new things that I’d been trying to do for three years, such as my double bass work in Children Of The Grave. There’s a lot of different bass drum movement, and I play the timbale with my left hand on that song too.

Ozzy Osbourne: Children Of The Grave was the most kick-ass song we’d ever recorded.

Tony Iommi: I wrote Sweet Leaf in the studio. I’d come back from Dublin, and they had these cigarettes called Sweet Afton. We were going, “What could we write about?” I took out a cigarette packet, and as it’s got on the lid, ‘The Sweetest Leaf You Can Buy!’ I was like, “Ah, Sweet Leaf!”’

Bill Ward: That’s about having a relationship with marijuana. That was part of our lifestyle then.

Tony Iommi: At the start of the song, that’s me bloody choking. I was in the studio doing this acoustic thing, and Ozzy rolled this big joint and brought it out. I had a couple of puffs and nearly choked myself. They left the tape running, and it turned into the ideal start for Sweet Leaf.

Tom Allom (sound engineer): What Bill and Geezer were doing together was incredible, actually. They were almost a jazz band, really.

Tony Iommi: We tried recording Into The Void in a couple of different studios because Bill couldn’t get it right. Whenever that happened, he would start believing that he wasn’t capable of playing the song. He’d say, “To hell with it – I’m not doing this!”

Geezer Butler: Tony was the great leveller. He steered the ship in the right direction. If there were four Ozzys, we never would’ve gotten anywhere.

Tony Iommi: I didn’t want to be the boss as such. It was just that they looked to me as a leader. I came up with the ideas and if anything happened I was the one that they’d come to. The same in the studio: they’d go home and I’d still be in there. I wanted the music to the best it could be, and I was worried to leave it in other people’s hands.

Billy Corgan (Smashing Pumpkins): Master Of Reality changed the way I thought when I was eight years old. I’d picked it up from my uncle. The album looked so cool with its dark, evil colour. It sounded so heavy. Okay, the lyrics are pretty hit or miss. Never has a man rhymed ‘insane’ with ‘brain’ so many times. But the music is amazing.

Things were changing gear for Sabbath, especially in the US. The press still hated them, but the kids couldn’t get enough. Master Of Reality was certified gold on advance orders alone in the States. In July 1971, they set off on a US tour, supported by Yes.

Rick Wakeman (keyboards, Yes): I was a serious drinker, as were all of Sabbath, so we got on like a house on fire. They had a seat on their private plane, so I’d travel with them. You literally couldn’t move for booze. Ozzy was putting away as much as me – which was as much as humanly possible.

Tony Iommi: The first time I tried coke was at the LA Forum in 1971. I said to one of the crew, “I really feel tired tonight.” He said, “Why don’t you have a line? It’ll perk you up.” I’d been around it for a while, but I’d never taken it. I only had a little bit. One line. But it felt great.

Bill Ward: We were getting into coke, big time. Uppers, downers, Quaaludes, whatever you like. It got to the stage where you’d come up with ideas and forget them, because you were just so out of it.

Tony Iommi: The success happened so quickly, but we just went along with it. The only thing that messed with our heads was the drugs.

Tony Iommi: We had all sorts of weird people coming to the gigs in America – witches, all sorts. People came to our hotel with black cloaks on, lighting candles. Some of those religious weirdos were as dangerous as the Ku Klux Klan.

Ozzy Osbourne: The Satanists never stopped being a pain in the arse. We were playing Memphis and this bloke in a black cloak ran on stage.

Tony Iommi: When we’d got to the gig, somebody had painted a cross on a door in red. We didn’t think much else of it. But later on we found out this bloke had cut his hand and drawn the cross in his blood. He was some religious freak. During that show, my amps were playing up and I really got pissed off. I kicked my stack over and walked off. And as I’m walking off, this bloke’s behind me. He’d got past security but somebody managed to jump on him. I didn’t know what was happening. I was still moaning about my gear.

Ozzy Osbourne: Before I knew it, one of our roadies was running on stage with a metal bar raised above his head, and he twatted the guy in the face. The satanic bloke was lying on the stage with his cloak wide open. In his right hand was a dagger.

Tony Iommi: It was only afterwards that I found out this bloke was trying to bump one of us off…