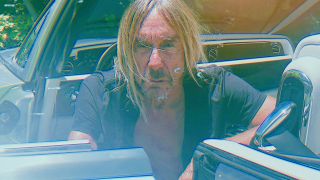 Iggy Pop has released a video for his track James Bond.

The song has been selected from Pop’s upcoming studio album Free, which will arrive on September 6 through Loma Vista/Caroline International.

It’ll be his first record since 2016’s Post Pop Depression, and will feature additional vocals from Faith Vern, Leron Thomas on trumpet, Robin Sherman on bass, Thomas Glass on drums and Ari Teitel on guitar, and will also include contributions from Sarah Lipstate, aka Novella.

The video has been directed by Simon Taylor and was shot on location at Sweat Records in Miami.

Pop says that James Bond tells a story, and adds: “I don't know what she's up to exactly, but the tables seem to be turning, and she's taking over. Well, why not? I’ll try anything once.

“I’ve never had more fun singing a lyric. Faith’s reading is so loaded, and Leron’s production and trumpet along with the band swings like crazy.”

Speaking previously about the album, Pop said: “This is an album in which other artists speak for me, but I lend my voice.

"By the end of the tours following Post Pop Depression, I felt sure that I had rid myself of the problem of chronic insecurity that had dogged my life and career for too long. But I also felt drained. And I felt like I wanted to put on shades, turn my back, and walk away.

“I wanted to be free. I know that’s an illusion, and that freedom is only something you feel, but I have lived my life thus far in the belief that that feeling is all that is worth pursuing; all that you need – not happiness or love necessarily, but the feeling of being free. So this album just kind of happened to me, and I let it happen.”

Pop will release his new book Til Wrong Feels Right on September 26, which will bring together selected lyrics illustrated with artwork and photos, along with reflections on his career by himself and others.

Iggy Pop: Free
Iggy Pop will release Free - the follow-up to 2016's Post Pop Depression in September. It's said to have “virtually nothing in common” with its predecessor “or with any other Iggy Pop album.”View Deal

Iggy Pop: 'Til Wrong Feels Right
For the very first time, Iggy Pop will bring his lyrics together with artwork and photos, along with reflections on his career by himself and others in this new publication.View Deal