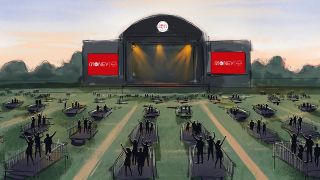 The UK’s first dedicated socially distanced venue is set to open this summer, with a lineup featuring live music and comedy.

The outdoor Virgin Money Unity Arena will welcome fans at Newcastle’s Gosforth Park, with the full lineup set to be announced next week.

A statement from SSD Concerts reads: “The UK's first dedicated socially distanced music venue is arriving in Newcastle this summer! Virgin Money Unity Arena will arrive at Gosforth Park in August with a stellar line up of live music and comedy.

“Join us for a unique socially distanced live entertainment experience. Enjoy the show with your friends and family from the safety of your own personal viewing area.

“The arena is designed to keep you safe, with organised parking and a socially distanced queuing system into the arena where you will be directed to your personal area.”

The lineup will be revealed on Tuesday next week (July 7) with tickets then going on sale on July 10.

Since the lockdown began, several artists have performed drive-in concerts across Europe, including Doro Pesch, while in Arkansas in May, Bishop Gunn frontman Travis McCready played the world’s first socially distanced concert in front on 229 people – around 20% of the venue’s capacity.

And earlier this year, during a quarter earnings call, Live Nation’s CEO Michael Rapino laid out a range of ideas about how the live music industry could open up again, which included drive-in gigs and “fan-less concerts with broadcasts and reduced-capacity shows.”