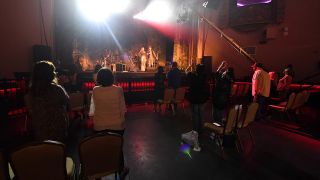 The live music world has been rocked to its core by the coronavirus pandemic, with the majority of tours and shows either postponed to a later date or cancelled completely.

But with some US states beginning to reopen, live music has started to trickle back – although it's like nothing we’ve seen before.

On Monday evening Bishop Gunn frontman Travis McCready and Lauren Brown played at TempleLive in Fort Smith, Arkansas, in front of 229 people - around 20% of the venue’s capacity.

Fans attending had their temperature checked at the door and had to wear face masks. Once inside, there were social distancing markers on the floor, chairs were placed 6ft apart and there was a 10-person toilet limit.

In addition, hand sanitisers were available throughout the venue and a one way system was also in place.

TempleLive’s Mike Brown told 5News: “This is about rock’n’roll, having a good time, live music, and being out with your peers and doing what you do as an American – you get out, you do things.”

Earlier this month, Denmark and Lithuania came up with a new way of giving fans a live music fix: the drive-in concert – an idea which is also being mulled over by Live Nation along with a number of other incentives.

In April, bioethicist Zeke Emanuel said he didn’t think concerts and sporting events would resume until the autumn of 2021 at the earliest, while Dr Chris Smith said this year “is basically a write-off” for the UK’s live music scene.