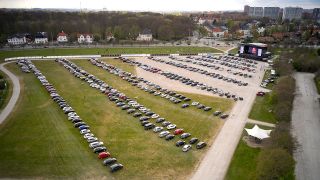 The world of live music has been thrown into turmoil due to the coronavirus pandemic.

Most spring and summer tours and festivals have either been postponed or called off entirely, due to limits on mass gatherings and the issuing of social distancing guidelines.

One health expert last month even reported that concerts and sporting events as we know them were unlikely to resume until at least autumn 2021.

But in Denmark and Lithuania, they’ve come up with a new way of giving fans a live music fix: the drive-in concert.

Danish singer/songwriter Mads Langer recently sold 500 tickets for a concert at Tangkrogen on the outskirts of Aarhus – at an outdoor location that was transformed into a drive-in cinema the following day, according to Forbes.

Langer later posted images from the concert, saying: “That feeling when you reunite with your audience although they were sitting safely in their cars.”

And in Lithuania, a series of drive-in concerts are being held at the Palūknio airfield close to the country’s capital Vilnius.

LRT report that several of the country’s best-known artists have been playing, with Giedrė Kilčiauskienė telling the crowd: “It's something unreal. You can’t imagine how it all looks from the stage.

“Instead of shouting, ‘Show me your hands,’ I feel like saying, ‘Move windscreen wipers left to right.’”

Could we see more drive-in concerts across the world as the year moves forward?

Despite the lockdown affecting the live music scene, artists have been coming up with ingenious and creative ways to share their music online.

That feeling when you reunite with your audience all though they were sitting safely in their cars 🚗 ❤️🚙 Photo: Camilla Lundby Mads Langer