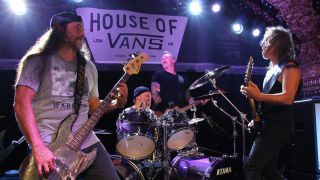 Metallica have released a video showing behind the scenes footage from their show at London’s House Of Vans.

They played at the intimate venue beneath the city’s Waterloo Station on November 18 to just 600 fans to launch their highly anticipated 10th studio album Hardwired… To Self-Destruct.

The show also marked Hammett’s 54th birthday, with the Metallica guitarist plastered with foam pies during Seek And Destroy – a moment that was also captured in the clip.

Hardwired… To Self-Destruct has topped charts in dozens of countries across the world, with drummer Ulrich saying that he’s only listened to the record a handful of times – but enjoyed it most when he heard it while out driving with his wife a few weeks ago.

Ulrich said: “We got three-quarters of the way into the record. We went to a place, had a couple beverages, then we drove back and listened to the last two or three songs. It was like, ‘This is pretty good.’

“Every time I listen I’m like, ‘This is pretty fucking good, actually.’ I’m feeling, as I’m starting to get a little distance, that this record may be better than I was aware of.”

The band continue to add dates to their WorldWired tour, which is expected to run for at least two years. The latest addition is a second appearance in Mexico on March 3. They’re the cover stars of the latest edition of Metal Hammer, on sale now in print and via TeamRock+.

The Metallica 'True Or False' Quiz: can you separate fact from fiction?