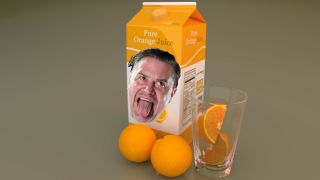 One of rock’s most outrageous tour tales involving Mike Patton taking a dump in Axl Rose’s orange juice has finally been debunked.

The story goes that while on tour with Guns N’ Roses in 1991, Faith No More frontman Mike Patton pooped in an orange juice carton he found in a fridge in Rose’s dressing room, before putting it back on the shelf.

Recounted in countless interviews, backstage chats and even in books, it now turns out the incident never actually happened – according to Faith No More bassist Billy Gould.

While many of Patton’s wilder tour antics did in fact happen, this is one tale that the band made up for a laugh.

Asked whether the tales of Patton’s antics were true or made up, Gould tells Classic Rock: “A little bit of both. We had fun, bringing those images to the mainstream. But the Axl carton story wasn’t true.”

Even though he avoided finding a floater in his orange juice, Axl was angry enough with Patton’s shenanigans to give FNM a serious talking to.

Gould adds: “That was true. And I have to say we deserved to get spanked.”

The full interview with Gould can be read in the Q&A feature in issue 231 of Classic Rock magazine, which is out next week in print and via TeamRock+.