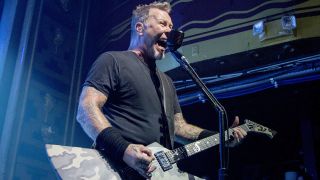 James Hetfield can be seen playing bass along to Metallica track Atlas, Rise! in a video short during a radio interview.

He recently appeared on German station Star FM to discuss the band’s new album Hardwired… To Self-Destruct, which was released last week.

During a break in the interview around the 35-minute mark, while the station broadcasts the track, Hetfield is seen picking up a bass guitar from the side of the room, tuning it, then starting to play along.

He begins to get into his performance towards the middle of the song and begins throwing shapes in the centre of the room. “Playing bass is so easy!” he laughs as he puts the instrument down.

But Metallica bassist Robert Trujillo probably has least to fear from Hetfield’s “discovery” – earlier in the interview he describes himself as a “frustrated drummer” and adds: “I tell Lars what to do, and he tells me what to do.”

Meanwhile, guitarist Kirk Hammett has discussed the band’s hopes to continue their career for many years yet.

Ulrich recently said he believed the band could continue, mentally at least, for another 100 years – now Hammett tells The Malay Mail: “I always play very, very aggressively, and in a very angry way.

Metallica have also released a video from their London album launch show last week, which was streamed online as it happened. The clip, which features their performance of The Four Horsemen, also includes behind-the-scenes footage. Watch it below.

The band continue to add dates to their WorldWired tour, which is expected to run for at least two years. The latest addition is a second appearance in Mexico on March 3. They’re the cover stars of the latest edition of Metal Hammer, on sale now in print and via TeamRock+.