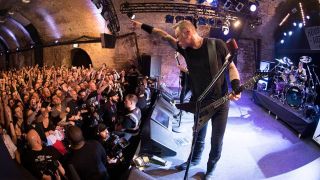 It’s been eight years in the making, but Metallica’s new album, Hardwired… To Self-Destruct, has finally been unleashed. And in typically in-your-face fashion, they launched it with an exclusive gig at the 600-capacity House Of Vans venue under London’s Waterloo Station.

At just after 9pm on Friday November 18, James Hetfield and co strode onto the House Of Vans stage for a two-hour, 15-song set that mixed classic Metallica tracks and cover versions with three songs from the brand new album. “London, are you alive?” proclaimed Hetfield. “Show us how it feels to be alive!”

Opening with their evergreen cover of Budgie’s Breadfan, the band ploughed into a setlist that spanned their 30-plus year career, from Kill ’Em All classic The Four Horsemen right up to new songs Atlas, Rise!, Moth Into Flame and Hardwired.

The show also marked Kirk Hammett’s 54th birthday, and the guitarist found himself plastered with birthday cake during final song Seek And Destroy.

The only disappointment was that that the band failed to announce any UK dates to add to their existing 2017 world tour, as had been rumoured.

Check out our exclusive photo gallery from Metallica’s London House Of Vans gig below.