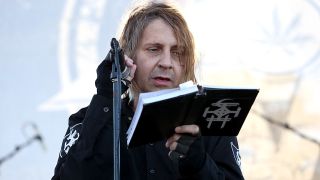 So far, more than 1800 people have contributed to the fund, which sits at $57,000. The singer’s wife Michelle Maher-Williams launched the YouCaring page as she gave full details on her husband’s condition.

He needs a liver transplant that will not go ahead until outstanding medical bills are settled.

Michelle Maher-Williams says: “I’ve just been so overcome by the extreme show of support that it’s been hard for me to find my words. Thank you doesn’t seem nearly powerful enough to convey my gratitude.

“How do I give thanks to you for potentially extending my husband’s life and giving us the chance to spend many more years together? The best that I can do is to promise to continue fighting for Michael. To be there to encourage, support and protect him, and to be open and honest with all of you along the way.”

Williams stepped back from performing with Eyehategod this year, but the nature of his health problems was never disclosed until this week. Phil Anselmo and Lamb Of God’s Randy Blythe have filled in for him at recent Eyehategod shows.