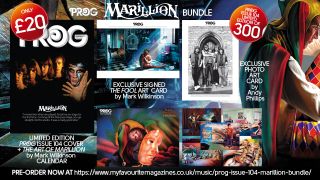 Marillion grace the cover of the new issue of prog Magazine which is on sale now. Prog is proud to have partnered with cover artist Mark Wilkinson for this exclusive bundle.

The bundle contains the latest issue of Prog with an exclusive, limited edition, not-in-the-shops Marillion cover, an art print featuring Mark Wilkinson's 2004 painting of The Fool, from which we created the retails front cover of the new issue, and an art print of photographer Andy Phillips' shot of the band outside Friars in Aylesbury taken on March 18, 1983 on the Script For A Jester's Tear tour.

Inside there's a 12 page feature with Fish, Mick Pointer, Steve Rothery, Mark Kelly and Pete Trewavas discussing their rise from Silmarillion to having their debut album in the UK Top ten. Plus the 2020 Mark Wilkinson Art Of Marillion calendar. And the free CD featuring ten tracks of new progressive rock music.

It's limited to just 300 copies worldwide. Oder your copy now, because when they're gone, they're gone.

Get the Marillion bundle now.