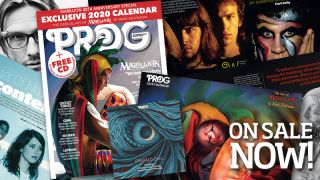 The new issue of Prog is on sale today, with Marillion gracing the cover.

“We took everybody by surprise,” say Marillion as we celebrate the band’s 40th anniversary in the latest issue of Prog. We sat down with Fish, Mick Pointer, Mark Kelly, Steve Rothery and Pete Trewavas to chart the band’s early career and path to the UK Top Ten with debut album Script For A Jester’s Tear.

This issue also comes with a 2020 Calendar featuring the Marillion artwork of Mark Wilkinson, who also tells us how he created the band’s famous jester character and how he and Marillion developed the character over subsequent albums and singles.

Steve Hillage - the prog guitar icon recalls his time as a member of the effervescent Gong.

No-Man - Steven Wilson and Tim Bowness are back with their first album for 11 years.

Steve Jansen - the former Japan drummer discusses his time in the band and his later work with brother David, Steven Wilson, Richard Barbieri and more...

Magic Pie - number five is alive with the new album from the Norwegian proggers.

Neil Innes - the Bonzo and Rutles man reflects on a career that's constantly flirted with prog.

Galen Ayers - Kevin Ayers' daughter reflects on the impact of her father's music.

Telepath - mainman Jacob Holm-Lupo opens up about his own prog world.

Critics' Choice - the Prog Magazine writers choose their albums of 2019.

And music from American Tears, 69 Windmills, Anders Buaas, Evership and more on the free CD.

You can buy the latest issue on sale here.