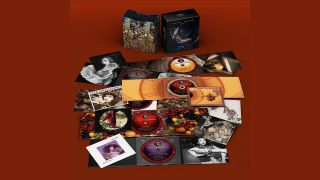 At the end of 2018, all ten of Kate Bush’s studio albums were remastered and re-released as part of four individual CD and vinyl box sets, alongside collections of rare tracks, cover versions and the live album Before The Dawn.

The Remastered Part 1 CD box set is the widest-spanning of the series, containing seven studio albums remastered by Bush and James Guthrie, and covering her 1978 to 1993 period. The full album list includes The Kick Inside, Lionheart, Never For Ever, The Dreaming, Hounds of Love, The Sensual World and The Red Shoes, while the cover art for each CD has also been reimagined using elements from the originals.

The box set is currently being sold for just £25.59 on Amazon (while stocks last), including free shipping. Considering we’ve seen it selling for up to £60 in the past, this is an absolute steal.

Containing seven remastered studio albums and new artwork, this stunning package is an absolute steal for collectors, and an expansive introduction for newcomers to Bush's music.