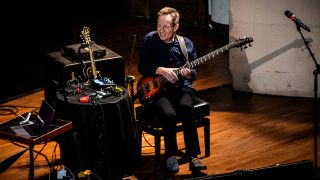 He’s teamed up with Finnish cellist Anssi Karttunen in the band, with the duo announcing they’ll play two shows at Tokyo’s Pit Inn, Shinjuku, on September 3 and 5.

A statement on Jones’ website reads: “It is incredibly rare to find two of the finest musicians in the world performing in such an intimate setting for what will be a series of remarkable concerts.

“Both musicians are known to be curious minds, always ready to learn and to discover. When they improvise, borders disappear, they are free to migrate beyond prejudices, across continents.

“In a world where walls are being built and people are told where they cannot go, Sons Of Chipotle want music to be a place of openness.”

Sons Of Chipotle will be joined on both days by multi-instrumentalist and composer Otomo Yoshihide and experimental musician Jim O'Rourke.

Tickets will go on sale on July 28 at 10am Japanese time.

Led Zeppelin are the cover stars of the brand new issue of Classic Rock magazine which celebrates the 50th anniversary of Led Zeppelin II.

Classic Rock 265 is available in UK newsagents now, and is also available to purchase online.