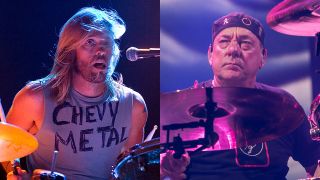 Taylor Hawkins of the Foo Fighters says he wouldn’t dare to try replacing Neil Peart in Rush – no matter how much he’d like to.

Hawkins is a longtime fan of the Canadian prog icons. He helped induct them into the Rock And Roll Hall Of Fame in 2013 and appears alongside bandmate Dave Grohl on the upcoming 40th anniversary edition of classic Rush album 2112.

The band’s future remains in doubt after Peart lost enthusiasm for continuing to work with them. He hasn’t confirmed his status – but frontman Geddy Lee said last week that he’d begun to accept the idea that their touring days were over.

“You know how many dorks would want to kick my ass if I tried to be in Rush? It would be like a nation of dorks chasing me and trying to kill me: ‘You’re not Neil Peart – don’t even think about it!’”

During his induction speech Taylor said of Peart: “His drumming was just as musical and melodic as anything in the band. Bringing the drums where they should be: the forefront of the band.

“Not only did he do the most ripping drum solos in the world, he also wrote the lyrics.”

The new version of 2112 is released on December 16. Rush concert documentary Time Stand Still was screened in cinemas earlier this month and appears on DVD today (November 18). The Foo Fighters are in the process of teasing a European tour, which currently includes five dates, with more to be announced.