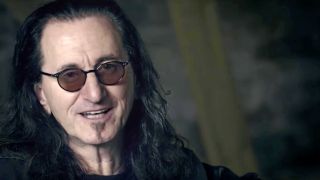 Rush have released a clip from their upcoming documentary Time Stand Still, in which the band look back at their first ever tour van, an aptly named Dodge Funcraft.

“We were younger,’ says Geddy Lee. “It didn’t matter. We were just crazy, travelling round the country in this stupid family van. There was something quite perverse about it.

“I remember one night the guys in Thin Lizzy challenged us to a drinking contest. So of course we had it in the Funcraft. We drank them under the table. But it’s a little tiny table in the Funcraft! And I used to look it and think, ‘families go on holiday with the kids in this sort of thing’, and here are all these subhuman musicians just sitting around drinking bottles of Chivas Regal until they puke.”

“I think I actually cooked in it,” says Alex Lifeson. “I think I made a tuna casserole.”

Time Stand Still also features a segment where Lifeson and Lee discuss the hijinks they got up to while on tour with Kiss in the 1970s. The film was shown to North American cinema audiences last night, and is released on DVD on November 18. It was shot during the band’s R40 tour in 2015 – presumed to the last full-scale tour of their career.