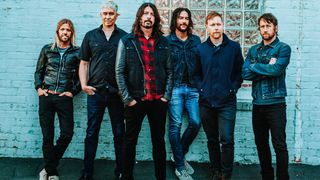 Earlier this week, Foo Fighters announced they would release their new album Concrete And Gold on September 15.

The follow-up to 2014’s Sonic Highways will feature 11 tracks, was produced by Greg Kurstin and is said to marry “some of the most insanely heavy Foo Fighters riffs ever with lush harmonic complexities.”

And in a new interview, vocalist and guitarist Dave Grohl reports that the album will feature “a bunch” of guests – including “the biggest pop star in the world.”

He tells BBC Radio 1’s Annie Mac: “We’ve made the biggest sounding Foo Fighter record we’ve ever made. I’m not just saying that. I said to Greg, ‘I want to make a record that sounds like Motorhead doing Sgt. Pepper,’ and he was like, ‘OK.’

“So we recorded an 11-song record with him and honestly, I think it’s going to take a lot of people by surprise. Every band says it’s the best record they’ve ever made, but it’s definitely the hugest thing we’ve ever done.

“For six months, I’ve been trying to keep this a secret and I can’t wait for people to hear it because this is the first record I’ve ever been this proud to play for people.”

Grohl adds: “We have bunch of guests we haven’t told anybody about. Some will really surprise you.

“There’s one who is probably the biggest pop star in the world – and I’m not kidding. They sing back up on one of the heaviest songs on the record and we’re not telling anyone who it is.”

Kurstin is known for his work with artists including Adele, Pink, Beck, Ellie Goulding and Lily Allen, with Paul McCartney reporting in March that he had hooked up with the producer for what will be his 17th album.

Foo Fighters are currently on tour across Europe and will headline the Glastonbury festival tomorrow night (June 24).