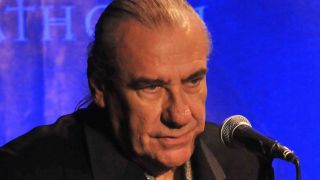 It’s his first musical project since the release of solo album Accountable Beasts last year, following his acrimonious departure from the Black Sabbath reunion before they recorded 2013 record 13.

Ward says: “In the desire to have my drumming spirit continue to live, I’m please to say that I’ve helped create a new three-piece band called Day Of Errors, accompanied by two guest musicians.

He’s joined in the project by bassist and lead vocalist Nick Diltz – of All Hail The Yeti – and guitarist Joe Amodea. The guests are percussionist Walter Earl plus Ward’s keyboardist son Aron.

Last year the drummer said he’d been working on the band for some time, although they didn’t yet have a name. He told Ghost Cult: “I do backing vocals but I’ve got two great singers.

“I have a life as a drummer, so I created the trio so I can go ahead and play wherever I can in the world.”

He’ll reveal more details in due course. Black Sabbath’s farewell The End tour continues until September, including a headline appearance at the Download festival this weekend. Guitarist Tony Iommi revealed last week that he misses the opportunity of playing pranks on Ward.