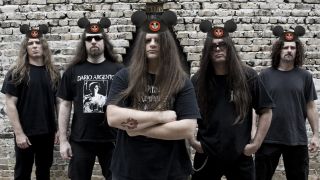 We’re too busy listening to rock and metal to tune into Radio Disney, but we’ll take a wild guess and say that that Cannibal Corpse aren’t the sort of band who’d be mentioned during their playlist meetings.

Our favourite YouTube piss-taker Wilton Turdley – the man responsible for the Ozzy Osbourne ska version of Over The Mountain and the bossa nova take on Du Hast by Rammstein – has returned with a very cheery cover of Evisceration Plague, the gore-fuelled title track of the Corpse’s 2009 album.

He’s stripped away the buzzsaw guitars, George ‘Corpsegrinder’ Fisher’s tormented vocals and their general air of psychotic menace to create something that sounds like early Biffy Clyro fronted by Kermit the Frog.

Now, the only thing is troubling us is the crystal clear enunciation of the lyrics, ‘I wrench the blade from the chest to the crotch, organs and entrails fall to the ground’. That’s just not on, to be perfectly honest…

Listen to this ska version of an Ozzy Osbourne classic