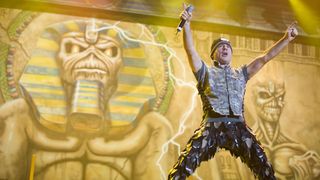 Iron Maiden might have started their career writing concise, punchy metal anthems, but as their career has progressed, Steve Harris’ love of prog rock has come to the fore, and their songs have become longer and more complex. We look at Maiden’s 10 most epic songs.

A highpoint of the Somewhere In Time album, Alexander The Great is remarkable for two reasons. Firstly, the sheer historical detail crammed by Steve Harris into its eight minutes and 35 seconds, but also Bruce Dickinson’s ability to negotiate such potentially tongue twisting lyrics as ‘By the Aegean Sea/In 334 BC/he utterly beat the armies of Persia.’

Maiden kicked off the Blaze Bayley era with Sign Of The Cross, the 11-minute track that opened The X Factor. But even better was The Clansman, Steve Harris’ chest-beating Braveheart tribute from Virtual XI. Later reinterpreted by the returning Bruce Dickinson, this stirring paean to freedom from tyranny has more than earned its place in the band’s live set.

Adrian Smith has penned many of Maiden’s more concise, melodic tracks, but the guitarist stepped out of his comfort zone on Dance Of Death, one of the band’s most thought-provoking records, with this complex, hard-hitting retelling of the bloodbath that took place in World War I’s Battle Of Passchendaele.

With four of its selections alone totalling 40 minutes of music, The Final Frontier stands among Iron Maiden’s most musically ambitious releases, though it’s also one of their most underrated. Steve Harris, who has a hand in each of its ten tracks, based the near-11 minute epic on author Raymond Briggs’ post-nuclear fallout graphic novel of the same name.

Maiden’s back catalogue contains several anti-war songs though few outstrip Steve Harris’ For The Greater Good Of God. Its nine-minutes-plus offer a mix of pointed lyrics (‘Somewhere there’s someone dying in a foreign land/Meanwhile the world is crying stupidity of war’) with some of the band’s all-time finest musicianship, notably from the five-minute mark onwards.

Maiden truly revealed their prog-rock roots on the Seventh Son Of A Seventh Son album, a conceptually based piece that some still regard as the group’s finest release. Enhanced by keyboards and narration and employing deft changes of tempo, at almost ten minutes long the album’s baroque title track offers a persuasive microcosm of its style.

Bruce Dickinson came out swinging upon returning to Maiden in 1999. If you’re going to boast: “We’re better than Metallica. Put it this way, they can try to walk onstage after an Iron Maiden show if they want” then you’d better be able to back it up. Almost ten minutes long, this was a prog-metal masterpiece fit to cement the band’s return to true greatness.

Maiden wrote longer songs, but none were as important as the closing track from 1982’s Number Of The Beast. With this seven-minute tale of a man’s final moments on earth before he meets the hangman’s noose, Steve Harris set out out his epic vision. More than 30 years later, it remains a true benchmark – and the band’s own favourite song.

Steve Harris’s interpretation of the Samuel Taylor Coleridge poem remains a triumph of light, shade and ambition. Introduced by Bruce on Live After Death as “what not to do if your bird shits on you”, Maiden’s concert rendition, complete with shiver-inducing quiet segment and eerily creaking bows, is among heavy metal’s defining moments.

Of course Bruce Dickinson’s Bohemian Rhapsody moment had to be Number One. Maiden’s longest song at 18 minutes and one second, it formulated on a Steinway grand piano over the course of a month and would be lifted even further by ornate orchestration – and the sound of Nicko McBrain belting a massive gong to symbolise the moment that the doomed R101 airship that inspired the song collided with the ground. Harry called the song a “masterpiece”. He’s not lying.