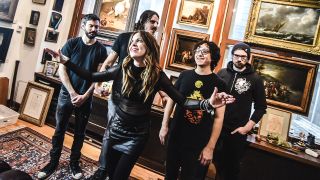 Chicago's District 97 have released a new tour teaser video ahead of their European tour dates. You can watch the whole video below.

District 97 kick off their European tour on 30 September in Berlin and continue through to play a run of dates in the UK co-headlining with Maschine, before heading back to the States where they will headline Progtoberfest and then support Flying Colors. The band have also added a London date to the tour. They will play the 229 Venue on October 9.

The band are gearing up for the release of their next album, Screens, which is released on October 4 through Cherry Red.

"Screens retains the essential elements of the District 97 sound, while also incorporating fresh, exciting influences," the band tell Prog. "The synergy of the new lineup is well beyond what we could have expected. We're so excited for everyone to embark on this next chapter of District 97."