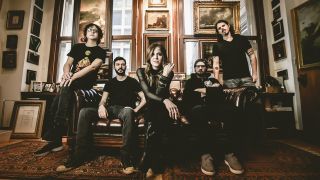 District 97 have released a teaser trailer for their forthcoming US tour dates. You can watch it below. The Chicago quintet will release their new album, Screens, late this year, but the album will be made available  to buy at the forthcoming shows.

"It took a lot of work and noses to the grindstone, but I'm thrilled we'll have advance copies of our new album Screens available on this run of dates," drummer Jonathan Schang told Prog. "It's a thrill to be sharing stages with incredible artists like Marillion, Tony Macalpine, Echotest, and Trey Gunn/Markus Reuter. We look forward to meeting old and new friends alike on the Pre-Screening Tour."

Screens will be released in September through Right Honorable Record Company/QEDG Management.