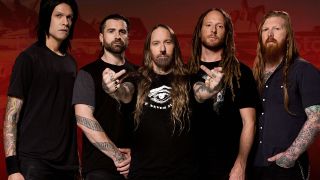 Devildriver have released a new 12-minute video interview focusing on the their upcoming album Outlaws ’Til The End: Vol.1.

While it’s been labeled a "country covers" album, the latest clip shows the band along with their collaborators on the record including John Carter Cash, Randy Blythe, Lee Ving, Hank III, Wednesday 13, and Burton C Bell talk what the record is and isn’t, and how they feel country and metal fans will receive the album.

Guitarist Neal Tiemann says: “It’s not a country record – it’s pure Devildriver metal. It’s got some light moments in it, but it’s also got some of the heaviest points of Devildriver’s career.”

Fellow guitarist Mike Spreitzer adds: “We did add some country elements like slide guitar and lap steel, but distorted in more of a metal way.

“Neal and I enjoyed doing that so much that I think on the next Devildriver record we’re going to implement some of that stuff because we had so much fun.”

Outlaws 'Til The End is now available for pre-order, while Devildriver will also play a set at this year's Bloodstock festival in the UK.

Devildriver Outlaws ‘Til The End tracklist