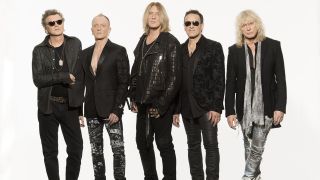 Def Leppard guitarist Phil Collen says the band are working on new material while they're out on the road with Journey.

The Sheffield outfit released their self-titled 11th album back in 2015, with Collen reporting that they’ve been working on three new tracks.

“Joe's got one, Sav's got one and I've got another one. We've actually started recording them. You can do this stuff all the time. You can do it on your laptop now – you don't have to be in a studio. You can actually get it moving and started already.

“So, yeah, we've actually started the next thing and I love the direction of it. When you do it over a period of time, you can actually get a bit more in it. When you cram it all in, it sometimes gets a little limited.”

The collection also features Live At The LA Forum 1983, which was originally released as a bonus disc on the deluxe CD version of Pyromania.

Def Leppard are currently on tour across North America with Journey and will return to the UK and Ireland for a run of UK and Ireland dates in December, which will see the band revisit the Hysteria album.