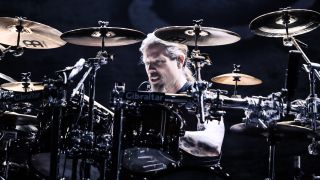 Megadeth have confirmed Lamb Of God’s Chris Adler as the man who’ll play drums on their 15th album.

It follows a series of hints that fuelled speculation he’d been chosen to replace Shawn Drover.

And the band say Adler’s appearance heralds “a new dawn of utmost heaviness” for the band.

Mainman Dave Mustaine reports: “Chris is a tremendous talent and an amazing person. He’s going to bring a new level of excitement and energy to Megadeth that the fans are going to lose their minds over.

“I have nothing but respect for my previous drummers – but this is going to kill.”

Adler will appear as a guest member. Mustaine has thanked his Lamb Of God bandmates for “allowing this opportunity to take place.”

There’s still no word on who’ll play guitar in place of Chris Broderick, who bowed out within hours of Drover’s own departure in November. The album is expected later this year after the thrash giants cancelled a tour planned for later summer in order to spend more time on studio work.