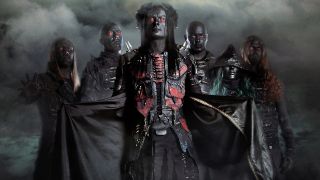 Cradle Of Filth have announced they’ve cancelled four shows which were due to take place later this month.

The band say they’ve taken the decision to free space to work on their new studio album, and have apologised for the “sudden turn of events” which has resulted in the scrapping of sets in Slovakia, Germany, France and Israel.

A statement from the band reads: “Unfortunately Cradle Of Filth are cancelling their three upcoming shows in Europe – prior to the special London Palladium show – plus the show In Tel Aviv, Israel, due to time restraints concerning writing and pre-production for entering the studio for recording the forthcoming new album.

“Having played literally all over the world this year, it is unfortunate that keeping the band this busy has forged an ever-decreasing window in which to fit everything in and so it is with some regret that we have to announce the cancellation of these shows.

“That being said, Tel Aviv will be moved to a slot next year to coincide with Cradle Of Filth’s first tour of China. The headline show at the Entrepot in Bruges, Belgium, on November 2 remains unaffected.

“Once again sincere apologies for this sudden turn of events, the next thing on our very metal agenda – and the last of a busy year – is the grandiose London Palladium performance on October 19.

“Please watch the heavens for a much pleasanter Cradle announcement later this week.”

The affected dates are:

Last week, Cradle Of Filth released a lyric video for Lustmord And Wargasm (The Lick Of Carnivorous Winds) from their upcoming remixed and remastered edition of Cruelty And The Beast, which is set to arrive on November 1 through Music For Nations.

They'll play the 1998 album in its entirety at the London Palladium on October 19 – a bill the band have branded Into The Pallademonium.

Cradle Of Filth: Cruelty And The Beast - Re-Mistressed
1. Once Upon Atrocity
2. Thirteen Autumns And A Widow
3. Cruelty Brought Thee Orchids
4. Beneath The Howling Stars
5. Venus In Fear
6. Desire In Violent Overture
7. The Twisted Nails Of Faith
8. Bathory Aria
9. Portrait Of The Dead Countess
10. Lustmord And Wargasm (The Lick Of Carnivorous Winds)
11. Hallowed Be Thy Name