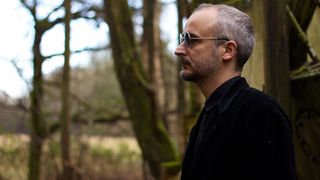 Cosmograf have announced that their sixth album will be released this summer.

Titled The Hay-Man Dreams, it will launch on July 10 and is said to be “a collection of six songs presenting a mythical tale of a farm labourer that dies prematurely leaving a loving wife and young family.

“His widow builds a scarecrow effigy as a shrine to her loss, and this ‘Hay-Man’ spends his weather beaten days in eternity, dreaming beyond his field.”

Cosmograf’s Robin Armstrong says: “It’s really a dark love story about a relationship built during a life of hard labour working on a farm in rural Britain.

“I came up with the idea after researching the fate of my great great grandfather who was a farm labourer and gamekeeper and died in mysterious circumstances.

“I’m making no apologies for the retrospective feel this record has. My previous album was very cinematic and sci-fi in presentation and I consciously wanted this record to sound very different – much warmer and evocative of albums of the 70s. I think this suits the folk tale feel of the album. ”

A full tracklist will be revealed in due course, while the cover art can be seen below.