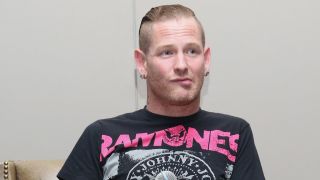 Corey Taylor says it’s possible he could quit Slipknot one day – because he might not have the energy required to keep fronting the band.

And he admits he’s only begun to consider the possibility after realising that he’s “not young any more.”

Taylor tells BBC Radio 1’s Daniel P Carter: “If you’d asked me a year ago I would have said ‘no.’ But just now, I’m just starting to…

But he doesn’t think he’d ever fully retire. “I might step away from Slipknot at some point, just because the way the music is, that energy, I don’t know if I could do that into my 50s.

“I would never want the band to feel like I was holding them back because I couldn’t physically do it. I wouldn’t completely quit music – I’d probably just step away from Slipknot.”

Taylor’s mindset has also affected how he feels about what the band will do next. He’d previously discussed the possibility of a concept album, tied in with a movie. Now he says: “At some point we’ll have to evolve again.

“At some point it has to mean something other than just the insanity. I think in the future we’ll make it less about the angst and more about the creativity – there’s so many creative people in this band.

“It’s definitely something we’re thinking about. But you just never know.”

Slipknot will head out on the road across the US in June with Marilyn Manson and Of Mice & Men.