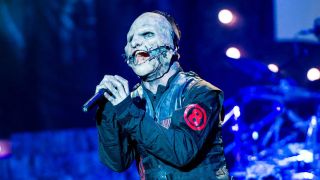 Slipknot frontman Corey Taylor has revealed the band’s plans to make a double-length concept album have expanded to include a tie-in movie.

But he says the project won’t even be started for at least two years.

Speculation has increased in recent weeks that the follow-up to last year’s .5: The Gray Chapter would be Slipknot’s answer to Pink Floyd’s The Wall or The Beatles’ Sgt Pepper’s Lonely Hearts Club Band.

Taylor tells Q103 Albany: “Clown and I and Jim have been talking about what would be next. The idea we had was to come up with the concept, then provide the soundtrack for it.

“But I told them the other day, ‘Let’s take it even further. Let’s make our Purple Rain, let’s make our The Wall.

“With a movie – not just the album, but do a movie.’ They were pretty into it.”

He adds: “It’s going to be a few years before we even get into that. But the fact that we’re laying the steps for it now just means that we’re right back to where we were, which us five steps ahead of the game.”

Slipknot are planning to take time off once they’ve completed touring in support of The Gray Chapter. Taylor and Stone Sour plan to work on their sixth album next year – and they’ve just started mixing Straight Outta Burbank, the next in their series of covers EPs.