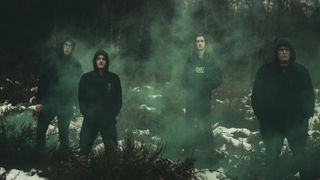 Conjurer’s vocalist and guitarist Brady Deeprose has given an insight into how he and his bandmates created their debut album Mire.

And speaking in the new edition of Metal Hammer, Deeprose has opened up on what it’s taken to achieve the sound on Mire.

He says: “I want to write the kind of music that I’d be excited about as a fan, and we definitely do that.

“What I love about this band is that you can’t just say it sounds like ‘budget this or that’ – you can’t immediately pigeonhole the music.

“I think it was Phil Anselmo who said, ‘Ripping off two bands is plagiarism, ripping off 50 bands is originality,’ and that’s basically what we do.

“We really make it a point to not write things that sound too much like things already written – we want every idea that comes to the table to be unique in its own way.”

Mire is available for pre-order from Holy Roar’s online store, while the cover art, tracklist and full stream can be found below.

The full interview with Conjurer can be found in the latest edition of Metal Hammer, which is on sale now.