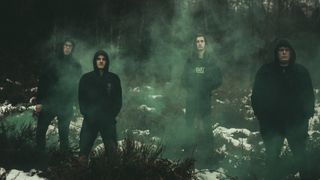 Conjurer have released a stream of their debut album Mire ahead of its official release.

The UK outfit will officially launch the record on Friday (March 9) via Holy Roar but the band have made all seven tracks available in advance.

The album received a rave review in Metal Hammer last month – and guitarist and vocalist Brady Deeprose tells The Independent that the reaction is something they would “never have expected.”

He says: “It’s one of those really weird things because nothing actually changes for us. It’s not affecting our approach to the music – we’re just playing to more people, which is wicked and we’re selling more merch, which again, is really helpful because it’s well expensive being in a band!

“But getting a 9⁄10 in Metal Hammer from Stephen Hill was a big deal – it’s stuff that we’d never have expected at all, regardless of how well the band is doing.”

Mire is available for pre-order from Holy Roar’s online store, while the cover art, tracklist and full stream can be found below.