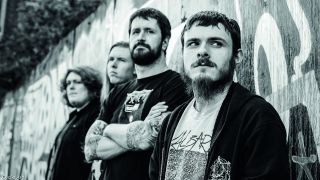 Living, breathing, snarling proof that UK metal has definitely not run out of ideas, Conjurer have pulled off that impressive trick of making a monstrously heavy noise that doesn’t instantly remind you of several other things. In fact, despite being resolutely crushing and bulging with wide-eyed intensity, debut four-tracker I sounds like a record made by men with a very clear, distinctive vision.

“We have pretty conflicting tastes, and I think that shows in what we do,” says guitarist Brady Deeprose. “It’s that fusion of low-end riff-worship, post-metal intensity, and then our favourite bits from everything else. We’ve all been in bands before and I think we stand out because our quality control is pretty stringent! We just don’t accept ‘filler’ tracks. If it doesn’t hit hard, then we drop it and work on something new.”

Barely a year into their story, Conjurer have already been snapped up by the much-admired Holy Roar label and have spent a great deal of time terrifying the citizens of the UK with their warped reimagining of modern progressive heaviness. Beneath that raging, brutal surface, however, there are also hidden and horribly dark depths to be explored.

“The song A Chasm Forged In Dread And Disarray came out as this miserable little ditty about a void opening up before you and you leaping into it, being enticed by destruction,” says Brady. “That tied into a theme of drug abuse, references to veins rotting away, straining skin, the quiet musical sections reflecting a catatonic state of decay and the heavy sections reflecting the horrifying damage that goes on inside and out. We throw words on a page until we achieve what we want to capture. We are always going to try and keep it interesting and honest.”

SOUNDS LIKE: Ultra-gnarly, downbeat post-metal with endless twists and turns

FOR FANS OF: Neurosis, Converge, Heck

LISTEN TO: A Chasm Forged In Dread And Disarray