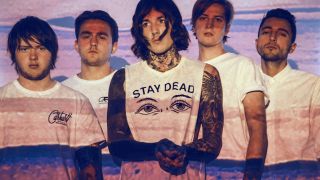 Bring Me The Horizon frontman Oli Sykes says the band have begun putting the pieces in place for a new studio album.

He tells Kerrang that the follow-up to 2015’s That’s The Spirit is still a long way off, but confirms they have 30 song ideas and that things are “falling into place.”

He says: “I don’t think any Bring Me The Horizon fan is going to be surprised at this next album sounding different to the last one.

“I kind of know where I want to go, but it’s also falling into place as we write the thing. We want it to be different and we want to push forward.

“We like the idea of breaking into the mainstream. We’re not ashamed of that, we don’t see it as selling out. We see it as a great challenge, to make music that can be adored by more people but still retain who we are. That is the goal.”

Sykes also says that he hopes fans will be able to hear some of their new material towards the end of 2018.

In November, a compilation album title 2004-2013 was released, which spanned their material while they were with Epitaph Records.

Sykes and his bandmate Jordan Fish successfully scaled the summit of Mount Kilimanjaro for charity in October last year, raising funds for Friends Of PICU.