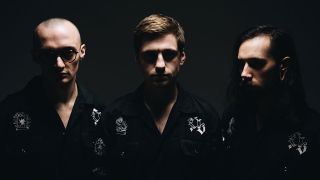 UK instrumental post-rock trio Coldbones have announced the tracklisting for their forthcoming concept album The Cataclysm. The band will release the new album, their second, through Dunk! Records on April 17.

The Cataclysm is a concept album described by the band as “a fatalist portrait”, with each of the album’s ten tracks serving as interconnecting piece of a larger picture that offers the listener nothing less than a front-row seat to the end of the world. The album is split into two parts, titled The Flooding Of The World and The Burning Of The Earth.

The Flooding Of The World
Collapse
Tide
Cleanse
Ascend

The Burning Of The Earth
Ruin
Consume
Hinterlands
Extinct

"As the debris and remains of life ascend towards the light of the sun, The Burning Of The Earth begins," the band explain of the second half of the album. "Thus, a silent, haunting landscape unfolds, worlds apart from the species and vegetation that once populated the earth, now left in ruin and soon to be extinct. For the seldom few that have survived, distress signals are transmitted in a desperate attempt for salvation."