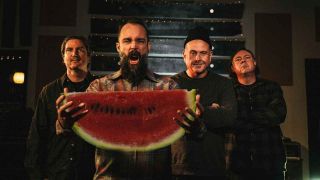 Clutch have been announced as the headliner of the opening night of next year's Ramblin' Man Fair, which will take place at Mote Park in Kent next summer.

The band will play three sets over the weekend: a main stage headline slot on Friday 17 July, a mid-afternoon mainstage appearance the following day – when they'll play a semi-acoustic set – and they'll finish off the weekend by headlining the blues stage on Sunday.

"We are very flattered to have been asked to do three sets at Ramblin’ Man 2020," says Clutch's Neil Fallon. "We plan to make each set as distinct as possible. The first set, on Friday, will be the barn burner, Saturday will be more of a semi-acoustic set, and for Sunday we plan to invite many friends to jam out to the end. Then, we will sleep."

“Ramblin Man Fair is committed to developing the festival headliners of tomorrow and, wherever we can, innovate the established format of the rock festival," adds festival organiser Chris Ingham. "It’s wonderful then that we can kill two birds with one stone and announce Clutch - the band of the moment in rock terms - and our residency concept together.

"Three sets in three musical styles on three stages over three days - what better way is there for both Clutch and Ramblin' Man Fair to lay out their collective visions?”

Other acts added to the line-up today include Swedish doom merchants Grand Magus, and Gascony duo The Inspector Cluzo. They join the bands already announced for the festival, with the Prog In The Park stage headlined by Big Big Train, and Hawkwind topping the Grooverider stage.