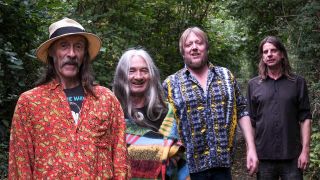 Organisers of the UK’s Ramblin’ Man Fair have confirmed that Hawkwind will play a special 50th anniversary set at next year’s festival.

Ramblin’ Man will take place at Mote Park, Maidstone, Kent, on July 17, 18 and 19, 2020, with the news that Hawkwind will headline the Grooverider Stage on the Sunday evening coming ahead of the release of their new album All Aboard The Skylark which is out tomorrow (October 25) and is available to pre-order now.

Organisers have also revealed the names of further artists who’ll play at the festival of rock, blues and prog next summer.

Monster Truck have been announced as special guests for the main stage on the Friday, while Vintage Caravan, The New Death Cult, Crown Lands and Piston will join Hawkwind on the Grooverider Stage on the Sunday.

In September, the full lineup for the 2020 Prog In The Park Stage was revealed, with Big Big Train, Curved Air, Pure Reason Revolution, Moon Safari, Lazuli and Blurred Vision filling the bill.

The news came after the festival scooped the Event Of The Year honour at the Progressive Music Awards at the Underglobe in London.

For more on Ramblin’ Man Fair, and to buy tickets, visit the official website.