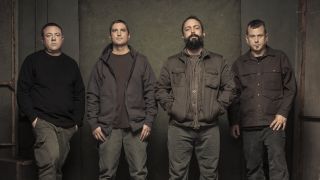 Clutch have announced three North American dates which will take place after Christmas.

Neil Fallon and co have been on the road in support of their 11th studio album Psychic Warfare, which launched in October 2015.

They were due to wrap up their current run of shows with their annual performance at Washington’s 9:30 on December 27. But they’ll now play extra dates in Bethlehem and Toronto, before a performance in Cleveland on New Year’s Eve.

They’ll be supported on the new dates by The Mike Dillon Band and Mariachi El Bronx.

Frontman Fallon revealed earlier this year that the band wanted to avoid playing it safe with their music, adding: “There are artists who see success with a song then try different versions of that song for the rest of their career – and that sounds very depressing. I would rather take a risk and fail at it.”

In August, they released a video for their Psychic Warfare track A Quick Death In Texas. The band are currently on tour across the US and will return to Europe in November.

A full list of Clutch tour dates can be seen below, with the new dates highlighted in bold.