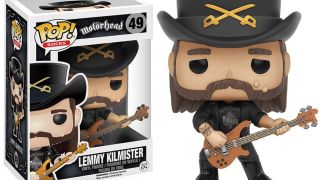 The latest in the firm’s Pop! Rocks series will launch on November 7 and is available for pre-order via Amazon.

The box features the Motorhead logo with a Jack Daniel’s motif on the side, while the figure shows Lemmy wearing his trademark hat and boots, an Ace Of Spades t-shirt and holding a bass.

Watch Unboxing Rocks reveal the figure in a video below.

Lemmy died in December last year at the age of 70, just days after being diagnosed with an aggressive form of cancer.

Dee said: “I’m proud to have been able to develop this beer with Camerons. The trials we have tasted have been great. We wanted this to be an exciting and refreshing brew which is for you, our Road Crew.”

Campbell is moving ahead with his band The Bastard Sons. They’ll release their self-titled debut EP on November 18 via Motorhead Music.

Dee, meanwhile, has joined Scorpions as a full-time member.