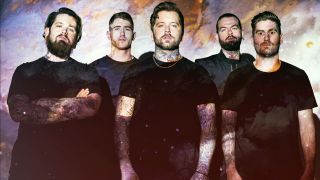 Bury Tomorrow have revealed they’ll release their new studio album in the spring.

The follow-up to 2018’s Black Flame is titled Cannibal and it’ll launch through Music For Nations/Sony on April 3.

And to mark the news, the UK outfit have unleashed a video for the ferocious title track, which can be watched below.

Frontman Dani Winter Bates has long spoken about the importance of discussing mental health, with Cannibal featuring some of his most personal lyrics to date.

He explains: “This album is for me as well as for the fans. It was a cathartic process to address some of the darkest moments I’ve had in my life.

“I wanted to live by my words. I talk to people about normalising mental health, so how can I write an album where I’m not talking about mental health?

“The normalisation of mental health is what saves lives. I want people to see the light in the dark. If they delve into that they can find solace in the discussion, the normalisation, the positive action by discussing this.”

As for the album title, Bates says: “The term Cannibal refers to being eaten away by your own thoughts but also eaten away by other humans. We’re not kind to ourselves, let alone kind to each other.”

Earlier this week, it was confirmed that Bury Tomorrow would play at this year’s Bloodstock Open Air, which will take place at Catton Park, Derbyshire, on August 6-9.

Bury Tomorrow: Cannibal
Bury Tomorrow will release their new studio album Cannibal in April. It features the blistering title track, with the band set to play the UK's Bloodstock Open Air later in the year.View Deal