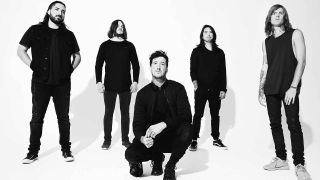 Of Mice & Men’s Aaron Pauley says the writing sessions for their upcoming album Cold World were like pruning a growing tree.

Comparing their producer David Bendeth to a “tree trimmer,” the co-vocalist and bassist recalls the pain of constructive criticism in the studio and “hacking” away parts of the record which held sentimental value for him.

Pauley tells Metal Hammer: “He’s fantastic. A great producer to me is a tree trimmer, in that their entire goal is to make sure you grow into a gigantic tree and the way they do that is by hacking limbs off. You have to be of the mindset to be strong enough to do that because it’s always very painful.

“When you’re writing you have to dig deeper and it’s painful. It’s hard trying to write about and talk about stuff that we do and it’s also hard to take criticism of everything you do in the studio. But if you want your tree to prosper and grow, you have to be willing to do that.

“While he’s one of the kindest people I know, he’s very direct and his honesty is important and more valuable to me than worrying about my feelings. The visceral honesty is the catalyst for the songs becoming what they become.

“It’s always the best and worst of times, but every time we come out I feel stronger than I did when I went in there. Now that we’re starting to play we’re starting to feel the branches come back and they’re gonna grow back bigger and better.”

Last week singer Austin Carlile said that their latest single Pain lends insight into his personal journey over the past few years – adding that the emotion plays a “big part” in his life. Now he adds that he hopes the song will help people realise that anyone can suffer in a similar way – and that no one is truly alone.

Carlile says: “With an emotion as raw as pain, everybody feels it – people with cerebral palsy or they’re paralysed, or a person who wakes up having lost a loved one or wakes up having gone through divorce or is being bullied – pain comes in a lot of different forms.

“I know that I’ve gone through more than most people too, but there’s always someone that’s experiencing worse than you in their own way. People you pass in the street – just because you can’t see it doesn’t mean it’s not going on, and that’s something we wanted to touch on with this song.”

Cold World will be released on September 9. It can be pre-ordered via Rise Records.

Of Mice & Men will tour with Marilyn Manson and Slipknot later this summer. They also recently announced a European tour which kicks off in September.