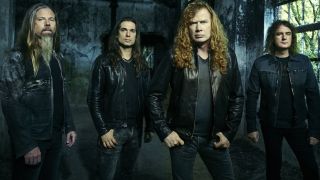 Megadeth mainman Dave Mustaine has said that Lamb Of God drummer Chris Adler’s time with Megadeth is over.

Adler acted as a session musician for 15th album Dystopia, and played a number of shows with the thrash icons over the past six months.

Although he was invited to join full-time, he insisted he’d remain with Lamb Of God, while trying to make as many appearances with Megadeth as possible.

Last month Dirk Verbeuren took over as he returned to duties with his own band, but it had been suggested that he’d return for further shows in July.

Speaking at a press conference in Israel, reported by Machine Music, Mustaine said: “Chris Adler is not with Megadeth – he’s in Lamb Of God. He was a session guy. It was what you could call work for hire.

The bandleader – who’d recently reported that he’d reveal a full-time sticksman “real soon” – added: “We still haven’t announced who our new drummer is going to be. It won’t be Chris Adler, because he’s in Lamb Of God.”

Following up on Twitter, Mustaine wrote: “Every interview said he was a session drummer and that he was in LOG.” Replying to a fan’s comment that many had secretly hoped Adler would join full-time, he said: “I know. But as you say, I made it clear that he was not in Megadeth.” Later he emphasised: “We have not announced who the new drummer will be yet.”