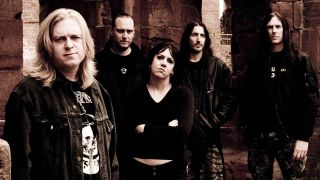 Bolt Thrower frontman Karl Willetts has confirmed to Metal Hammer that the band have officially called it a day.

The band issued a statement earlier today to pay tribute to late drummer Martin ‘Kiddie’ Kearns one year after the 38-year-old’s sudden death. While they said they wouldn’t ever replace Kearns, it wasn’t clear from the statement whether that meant Bolt Thrower would disband.

Now Willetts says: “Yes, I can confirm that Bolt Thrower are definitely over for good. There will be no reunion tours etc…no compromise.”

Kearns passed away peacefully in his sleep last year after being taken unwell at rehearsal. Bolt Thrower said they wanted to deal with his death privately and take time to consider their next move.

The earlier statement read: “When we carried his coffin to his final resting place, the Bolt Thrower drummer position was buried with him.

“He was, and will now forever remain ‘the’ Bolt Thrower drummer, our Powerhouse and friend Martin ‘Kiddie’ Kearns.”

Formed in Coventry, England, in 1986, Bolt Thrower released eight albums – the most recent being 2005’s Those Once Loyal.