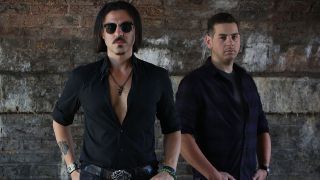 Blurred Vision have announced a shake-up to their lineup.

The band remains helmed by Sepp Osley, but Sohl Osley and Ben Riley are no longer in the group and have been replaced by bassist Bentley Levy and drummer Jake Bradford Sharpe.

Osley explains: “My brother Sohl decided the time was right to retire from live music. He’s hung up his bass and, it goes without saying, will be sorely missed. His vision, wisdom and talent have left an indelible mark on the music he helped create.

“And as drummer Ben Riley goes on hiatus, his presence and unparalleled playing will carry on in the music he helped shape over the last eight years. I look forward to sharing the stage with him again in the future.”

Sharpe will join Blurred Vision for various live shows, with Osley reporting that the position behind the kit will be fluid.

Osley says: “I’ve been playing with my peers recently, some of London’s best young musicians, and it was just too difficult to choose. So we all agreed – why choose at all?

“Blurring the lines on the drum position suits everyone, suits the music and suits the paradigm of what we want to uphold as a band. Change has always been our watchword.”