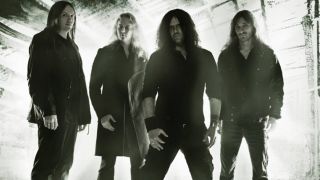 Kreator, King 810, Inquisition and King Parrot are the latest names to be added to this year’s Bloodstock bill.

German thrash legends Kreator will play the Ronnie James Dio main stage on the Saturday in support of 14th studio album Gods Of Violence, which was released in January via Nuclear Blast.

Kreator vocalist and guitarist Mille Petrozza says: “We are happy to finally return to Bloodstock! Kreator will give you the full treatment this time. We shall kill!”

King 810 will also perform on the main stage the same day in a UK festival exclusive set. They launched their second album La Petit Mort Or A Conversation With God last year.

Black metal outfit Inquisition will headline the Sophie Lancaster stage on the Friday where they’ll play tracks from their latest album Bloodshed Across The Empyrean Altar Beyond The Celestial Zenith, while King Parrot will also take to the Sophie stage in support of theirPhil Anselmo-produced album Dead Set.

Tickets for the weekend are available via the Bloodstock website, while a full list of artists announced so far can be found below.