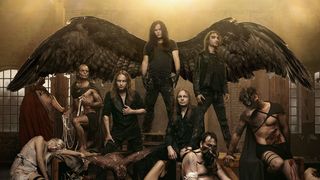 It’s been nearly five years since German thrash legends Kreator released a new album, but within a few seconds of new opus Gods Of Violence erupting, it’s like they’d never been away. As the band prepare to launch a full-scale assault on the UK, accompanied by Sepultura, Soilwork and Aborted, we spoke to frontman and guitarist Mille Petrozza about the new songs and the positive power of thrash metal.

You’ve been making music and touring relentlessly for over 30 years now, so does something specific have to happen for you to think ‘Right, I’m ready to write a new album…’ or can you just click into it and start?

“First and foremost, I have to be in the mood to get inspired again. That demands a certain amount of time off, not just a week but a couple of months, so I can start writing it and thinking about new music. But inspiration comes sometimes as a surprise, when you don’t expect it, and in a perfect environment you have a studio nearby ha ha!”

We have to ask about Satan Is Real. It’s a total heavy metal sing-along. When you write something like that, do you immediately think ‘This is perfect for the live show!’?

“I guess so, but I wasn’t so sure about the title. Sometimes, when you’re a metalhead and you hear a song title like Satan Is Real, it’s almost on the edge of cheese, you know? I had to fill the title with a meaning. I was thinking about a hymn-type idea, but I was mostly concerned with the lyrics. Some bands can sing about how great Satan is and get away with it, but it wouldn’t have served a purpose for us. It’s a catchy song and I think it’s definitely going to be one of the live favourites. The people that only know the title so far, when they hear it, they’ll understand.”

The other song that jumps out is Hail To The Hordes. It has an almost folk metal vibe and sounds like an instant live favourite. It’s also a straightforward tribute to your fans and the metal scene. What made you write it?

“Well, it took me 14 albums to write a song about the metal community ha ha! I never found the right words to express it before. I wanted to talk about the metal community but not in a cheesy way. It’s about strength. For a Kreator song, it took me a while to open up to that kind of stuff. We’ve been into metal for so many years, but it wouldn’t have felt honest to write a song about this if I wasn’t 100% convinced that these are strong words. I won’t mention any bad examples, but you know there are many, many songs about metal that are a bit too far over the edge! You mention the folk-ish vibe… I just wrote the song and didn’t think about any particular form of advice, but our producer Jens Bogren said ‘This sounds Scottish!’ Then he had the idea of the bagpipes at the end of the song.”

…which is a stroke of genius, even though it probably shouldn’t work!

“Yeah, absolutely! I have friends in the German band In Extremo and we asked them if they could play bagpipes on the record. I really respect those guys. They’re not my favourite band but they know how to play bagpipes ha ha! We have these medieval festivals in Germany and every band has bagpipes, but In Extremo are the only band I can listen to from that genre. So the song came out good. Our fans will like it and I promise they won’t feel embarrassed when they hear it!”

The album title, Gods Of Violence, seems particularly pertinent given how fucked up the world is right now. Do you feel a responsibility to have a political edge to what you do?

“That’s an interesting thought. When I wrote the first song for the record, I had this idea about Greek mythology and I thought ‘Maybe I will write a concept album…’ but it didn’t work. I’ve written most of the lyrics in Kreator, almost 90%, so there’s always some political influence, even though I hate politics. I couldn’t care less about it, but when I wrote the lyrics to the song, you look at the world and it all falls into place. No one can predict the future, but especially with the election in the US, I was expecting the worst to happen and it did.”

But would you say the underlying message of Kreator’s music is positive, despite everything?

“Of course. In the music, I try to always be metaphorical. The metaphor is that okay, the world is a fucked up place but let’s make the best of it. I’m a positive person. PMA means a lot to me. So when I write about these negative things, songs like Totalitarian Terror or World War Now, all these epic songs about the world going to shit, the essential message is ‘You know what? We have this alternative community, the metal community, and we’re able to enjoy life, whatever happens’. We know how to be different, even though things are fucked up. Not getting too philosophical, but I think that’s essential for living a happy life. A little bit of escapism in metal is very important. You go to the show and forget about all the shit, but you’re still aware what’s going on around you.”

Music is such a fundamental part of our freedom, isn’t it?

“Absolutely. Not only music, but all forms of art, literature, movies, you name it. It’s something that’s worth fighting for, to keep that freedom and not let people fuck with it, whether they’re terrorists or politicians. People have always tried to oppress groups and subcultures. Look at the Bataclan. We should never give in to these people.”

Kreator’s new album Gods Of Violence is out now, via Nuclear Blast.

They’re touring Europe with Sepultura, Soilwork and Aborted at the following dates: